Today’s installment of My Daddy’s Records was possibly the first R&B record that I remember coveting. I was seven and had heard a little bit of everything up until that point, thanks to Friday night dominoes/spades get-togethers at my mother’s favorite cousin Carrie’s house, or sometimes at my uncle Manny’s.

There were three things that I remember most from those events: the smell of fried catfish, the sounds of laughter, smack talk, and dominoes slamming on the tops of weak folding tables, and the Gap Band. Obviously there were other albums played; everything from Marvin Sease to Hall and Oates, but it was something about those boys from Oklahoma that pulled me in.

And the album, which I believe is their signature work, Gap Band IV, was the first album cover that I ever nailed to my bedroom wall for decoration. They were rockin’ those expensive Member’s Only jackets. They looked cool,  they were smiling, and the trumpets and bass guitar spoke to me. Plus, rewinding a song you loved took some effort. Back then, singles had long, jam session like versions and B-sides that lasted for two and a half months. It was awesome. As a matter of fact, we formed our own version of the Gap Band in Miss Smith’s second grade class; myself, Todd Gridine and Kenny Lasker. You know I was Charlie!

So now, Ezra and Solo have at least five Gap classics on their devices, and that is—I can’t help it—I know its corny—OUTSTANDING! Solo actually thinks that Uncle Cholly is a robot or a vampire. He can’t understand how this cat has been able to make dope soul music for so long. Neither can I.

Here’s my favorite track from the 1982 classic (Click pic): 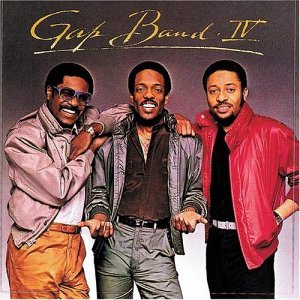