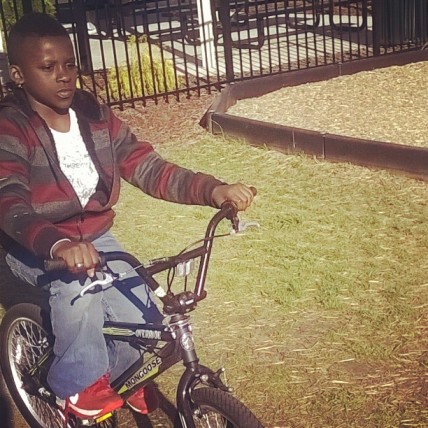 “brown boys
are loved by the sun,
admired for their
confidence,
charm,
style and
strength.
wrap them with rays;
golden, loving arms.”

I took this picture of Silas and wrote that short poem on December 3rd, 2014  after finding out that Officer Daniel Panteleo was not indicted for choking out a Staten Island man named Eric Garner on camera. Garner was murdered for allegedly resisting an arrest for selling loose cigarettes.

That was the day I ran out of explanations to tell my four Black sons.

After a long day of academic stress and strain, I allow the Mighty (the three younger brothers minus big brother almighty) at least twenty to thirty minutes to unwind and decompress. Their destination of choice was a lovely, well manicured, spacious park with two playgrounds, an indoor basketball court, a half-mile track that surrounded a wide, tranquil pond full of perch, box turtles, squirrel tree frogs, and salamanders. They’d toss the football, play freeze tag, sit on swinging benches in between foot races, skip rocks, or ride their bikes. The track is exclusively for joggers, walkers, and the casual, elderly, exercise maven adorned in the latest rubber sweatsuit, fanny pack, and CD Walkman. The rule is an extremely loose one that usually depends on how many people are actually on the track. But that day, the brothers got on their rides and circled the pond four or five times without regards to park etiquette or a posted sign that is usually ignored.

When we first arrived at the park, and the boys ran out of the van, I cried tears of anger, and pounded my fist on the steering wheel repeatedly. I listened to pundits argue that Mr. Garner  would still be alive if he had only complied or if the officer was justified in administering a choke hold that had been banned in NY since 1993. I sat and watched my boys play, blissfully ignorant to the day’s events, and just as unaware of a man named Garner being murdered as the White stay-at-home mothers that pushed their babies in expensive strollers around the pond; unaffected, apathetic, their world completely unscathed.

After the devastating murders of Trayvon Martin and Mike Brown, I had meetings with my boys to explain the filth of racism, how it permeates our every day lives, and unfortunately, the assumptions and decisions that some people will make about them. I discussed the history and genealogy of violence in America, particularly against Black men/boys. I don’t have the luxury to omit these conversations. My eight, ten and fourteen year old children, in a sense, are no longer children as soon as they are physically considered threats, regardless of who their parents are, the grades that they make, where they live, or how wonderfully beautiful they are in  their mother’s eyes.

But I reassured them, especially eight year old Silas, that as long as I have breath in my body, that I will protect and defend them. I can’t really promise that, but under no such circumstances will I talk to them about simply being ‘safe’, and being ‘cautious’. I’ll talk to them about being ‘informed’, being ‘brave’, and having ‘solutions’. My job is not  to plant seeds of fear for any man, system or institution. My job is to make them aware of the evils and challenges they may face once I shove them off, gently, so that they may bring about ripples, waves, and storms of change. Positive change. I’ve said it once and I’ll say it again, I’m raising DIFFERENCE MAKERS, dammit!

If you have young Black people in your lives, in any capacity, it’s not enough to just pray for and hope for their safety. You have to work towards, put energy in, and then pray that they become walking, breathing solutions,  constructive rabble rousers, and change agents.

Since the murder of Eric Garner, the sacred names of other unarmed Black people killed by police officers have piled up. I’ve made the conscious decision to no longer hold those table meetings with my sons. That’s not to say that we won’t have our talks as similar events occur (and they will), and be oblivious to the evils that will live on far beyond our lifetime. But  my energy will be better served continuing to build them up; intellectually, spiritually, and affirm their individual strengths, and self worth. The psychological toll that is done on young Black minds, after witnessing and having knowledge of how little value their lives hold in this country can be irreversible. I won’t let it. Leaving Mike Brown’s eighteen year old, bullet riddled body uncovered in the middle of the street for hours, or the video of twelve year old Tamir Rice being shot within seconds of the policemen arriving on the scene are psychological weapons used to keep Black youth in line. I know this.

Instead of creating a culture of fear, I’ll show them videos on Paul Robeson, Fannie Lou Hamer, and Marcus Garvey.  We’ll read the works of Sir Paul Laurence Dunbar and Gwendolyn Brooks. We’ll listen to the prophetic words of  KRS-One and Chuck D. I’ll broaden their libraries with novels like Sam Greenlee’s “The Spook That Sat By The Door”, and classic commentary like W.E.B. DuBois’ “The Souls Of Black Folk”. Expose, introduce and surround them with other progressive, prominent Black people in the community. Fill them with positive words, show them unwavering, unconditional love and support.

Take random pictures of them being free, and confident, and brave,and resilient, and defiant, and beautiful. Take charge of the narrative, at least in your home, so that they can continue to grow without any amount of useless fear dictating their future.

Frame those pictures and nail them to the walls of your home. They will be daily reminders of how brave your babies are, and how no amount of evil will derail them or even challenge their eventual roles as difference makers.

This song is really the evolution of Talib Kweli’s groundbreaking track “Get By” Let’s get free.