My guys do a great job of retaining every day interactions that I’ve long forgotten. Little things. But usually their rendition of things that I’ve said or have done are right on point. That’s why it’s imperative to 1) keep it real with them, 2) always have the best intentions, and most importantly, 3) create rituals that will live with them for a long time and be building blocks for their future as men, fathers, and husbands.

One of the many rituals that I personally look forward to is when we ‘Take It To The Table’ the night before the first day of school. We started this annual occurrence four years ago when I transferred the boys to a high performing charter school in Kansas City. Ezra was a fifth grader, Solo, a second grader and Sy Money a kindergartener. This is how it all went down for the first two years: 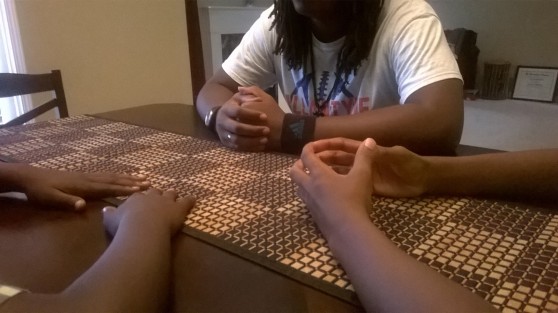 I’d have them seated at our long, heavy, dark mahogany dinning room table. The only light in the room was directly above the table. Now that I look back, it was an intimidating scene for two early elementary students and a kid that had just recently stopped wearing pull-ups.They’d been instructed to only bring two sheets of notebook paper and something to write with. Sy Money would bring a crayon, Ezra, a dried out pen or Sharpie, and Solo, one of those irritating mechanical pencils. I’d begin by going over how we had hopefully strengthened one of their academic weaknesses over the summer, and juxtaposed my expectations to what their individual expectations should be for the up coming school year. I wanted it to feel like a business meeting, while at the same time calming their nerves and injecting them with a last dose of confidence, affirmation, and focus. I’d give each brother a chance to verbally share what they’d plan to accomplish, inside and outside of the classroom.

They’d jot down their goals, put them somewhere safe, and then we’d hold hands, and go around the circle, sending up strong prayers of success, achievement, and growth.

Fast forward to the ninth, sixth, and fourth grade, and not much in the ritual has changed. In fact, the brothers look forward to it. When I ‘Call Them To The Table’, instead of little brown eyes filled with trepidation and worry, they come with a purpose, all smiles, with spiral notebooks, sharpened #2 pencils, focused eyes, and boisterous voices. I love it.

They all sit down wearing the same grin, because they have no idea what crazy thing I’m going to begin the meeting with. Or maybe they think it’s cool or amusing how I take them so seriously. They know I’m all about effort, setting attainable goals, and doing whatever it takes to accomplish those goals. That’s all I ask for. Effort.

This year, I went around the table and  shared what I was most proud of, as it pertained to each brother. I also shined a light on their weaknesses and what they could do this upcoming school year to be successful. I think its important to put a couple of their academic flaws out there in the open for the other brothers to hear (nothing too personal; I can’t mess up the privacy pact and level of trust that I have with each brother, but that’s another column) so that they can hold each other accountable. They jot down the advice thrown their way, and keep it moving. Silas is the most obstinate, but at the table, he just nods and jots. They know that Pops won’t steer them wrong.

I give them five minutes to write between six and ten goals, short or long term, that they’d like to accomplish. When they’re done, each brother shares with the rest of us. They read with their chests stuck out, and loud. Nothing too fanciful or too idyllic. Real goals. Concrete goals. Attainable. Don’t get me wrong, there is some BS thrown out there like “…More girlfriends”, “…to up my shoe game”,  …” Thirty touchdowns”.  But here’s a short list of their top two goals:

Ezra: To maintain a 4.0 GPA each semester and to lead his JV football team in sacks or tackles for a loss.

Solo: Take good notes, study and make no less than a “B” in each class; lead my football team to a championship.

Silas:To check over my work when it’s completed, keep a 3.5 GPA and up; learn how to play the guitar or trumpet. 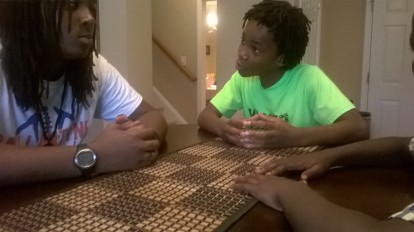 Well, its been four weeks since school began, and the brothers are rolling so far. Even little Nnamdi is in Pre-K. He couldn’t sit still for the meeting, but he did show his face. He’s the life of his class, and I’d like to believe that some of that is attributed to him gleaning some of the knowledge and wisdom from his big bros at the ‘table’.

Currently, Ezra is holding down a 4.0 GPA, and he is one of the leaders on his football  team. He only has two tackles for a loss, but he is a force, and its early in the season. Solo has always been a hard worker, but has not always been the strongest academically. I worried about him moving on to middle school, but he has surprised the hell out of me! He’s an organized little brother, so I think the compartmentalization of each class helps him to maintain that structure. He brought home progress reports from each core class, and they were all high 80’s and mid 90’s! My man. Plus, he is the defensive captain on his football team. They just beat their arch nemesis, The Providence Vols this past weekend. Solo had 110 yards rushing, 2 TDs, 7 tackles, a 2 forced fumbles! He’s a force on both sides of the ball! Sy money? He’s currently taking trumpet lessons and being bombarded by me with the jazz stylings of Roy Hargrove, Irvin Mayfield, Cliff Brown, Wynton, Blue Mitchell (do I even have to mention Miles?) He has a solid B average, but that’s not good enough. He can make all A’s as well, and he will. 3.5 and up. More of the ‘up’, my brotha.

Our annual meeting, if nothing else, shows my guys that if you set measurable goals for yourself, and do the work to see them through, that all things are possible. I’m talking about creating positive habits and mindsets. They taped their lists of goals to their dresser mirrors, the steps to the top bunk bed, and on their headboard. It’s serious to them. They believe in the power of prayer, they trust me, and they’ve seen what high level, group aspiring can produce. They know that if they put their minds to it, all things are possible, especially when you sit with your old man, and plan, and pray—at the table.

RTM joint of the month: Bring The Pain-Method Man

That’s what I expect, and so should they.